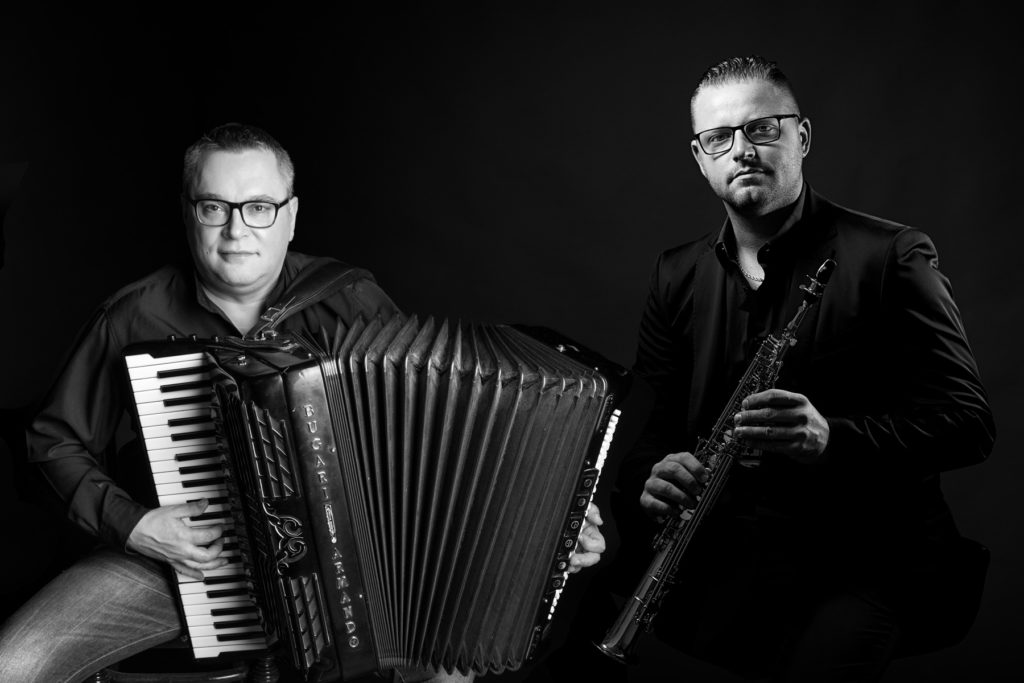 fiSAx is a duo formed by saxophonist Alex Sebastianutto and accordionist Sebastiano Zorza, two of the most eclectic and important artists in the Italian music scene.

Their live concert activity has seen them as protagonists on prestigious stages in Italy, in various European countries, in the United States and Asia, always acclaimed by audiences and critics.

During their musical career, they distinguished themselves by obtaining the first prize in many national and international competitions and they collaborated with important orchestras such as: Orchestra of Teatro S. Carlo in Naples; Orchestra of Teatro la Fenice in Venice; Orchestra dei Pomeriggi Musicali of Milan; Symphony Orchestra of Zagreb; Berliner Symphoniker Orchestra and more.

They took part in numerous musical, radio and television recordings and also collaborated with renowned artists such as Milva, Antonella Ruggero, Elisa.

Because of its versatility, this duo has developed a diversified repertoire ranging from transcriptions of pieces belonging to the classical period to contemporary music.

It’s a journey through the captivating sounds of Latin America’s music which is able to shake the deepest spots of the soul.

Passion, nostalgia, liveliness, sensuality are the contrasting emotions that allow the intimacy of the duo, saxophone and accordion, to create an overwhelming and, at times, hypnotic atmosphere.

It’s an avantgarde musical project in which cultured and popular music blend together thanks to the exceptional tonal and technical versatility of the two instruments.

The introspective vitality of the saxophone and the pressing rhythm of the accordion give voice to a wide range of emotions created by the poignant melancholy of the milongas and the fiery intimacy of tango.

“Alma” is an all-encompassing musical experience in which the two virtuous artists play the most exciting pages of the Argentine repertoire through the compositions of its most significant authors such as Piazzolla, Galliano and Girotto.