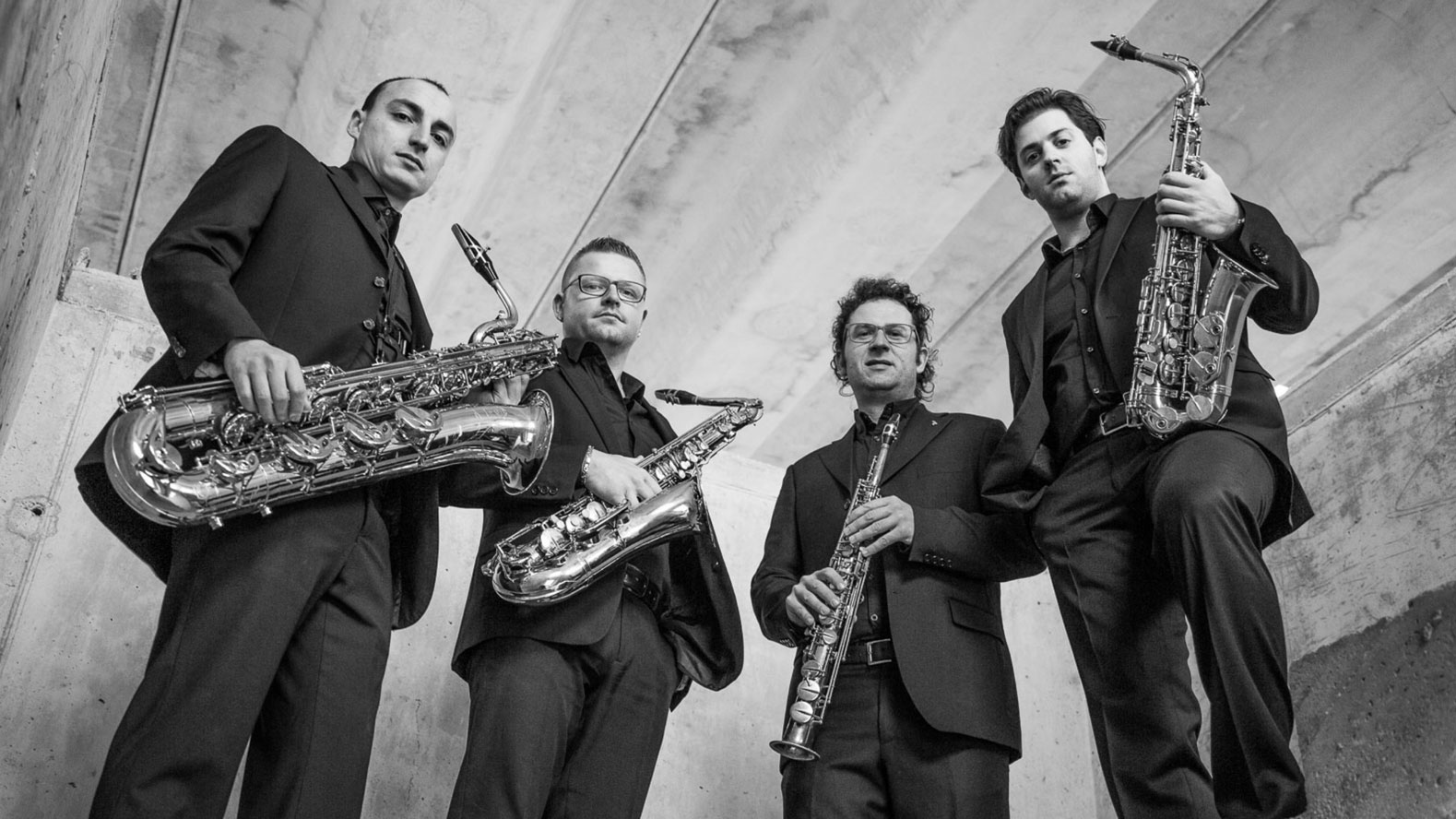 The MAC Saxophone Quartet was established in 2010 by four soloists who won numerous and important musical collaborations and numerous first prizes in national and international competitions.

Appreciated by the public and critics the recording works “Faces” (2011), “Zahir” (2013), and “Viaje” (2016). Very active also on the contemporary side, the quartet was dedicated to wonderful pages written by the masters S. Movio, P. Ugoletti, P. Ros, D. Lazzaron, R. De Giacometti, C. Corazza, A. Cuozzo.

The quartet performed in prestigious events such as the “XVIII World Saxophone Congress” in Zagreb”, the “Navy Band International Saxophone Symposium” of Washington D.C. and has collaborated with artists such as R. Plano, L. Cottifogli, V. Sivilotti.

In a contemporary world enveloped in multimedia elements, where speed and movement represent the status of modern humankind, the new project of MAC Saxophone Quartet fits in synergy with the eclectic voice of the singer Luisa Cottifogli on original music by the composer Valter Sivilotti.

An extremely versatile and captivating show that develops from the idea of ​​using multimedia, in particular the video projection of a comic that interacts with music, singing and acting.

Music is not used by Valter Sivilotti as a simple soundtrack for the images but it interacts and supports the development of the story, amplifying aspects of the chain of events in a complex structure linked to contemporary expressions, including those most connected to the world of art/cultivated music.

This is possible because of the excellent synergy obtained by the MAC Saxophone Quartet, at ease in that tourbillon of styles and genres that have characterized the musical ‘900 up to the present day, and the voice of Luisa Cottifogli that presents various attitudes ranging from singing to recited voice, from whisper to “broken” voice and shows her great flexibility and versatility.

All this in an emphasis of animation/interaction where the playful aspect becomes an integral part of the experience because of the expressive possibilities involved in this project: aspects of the story are lived again in a vivid and real-like way, or distorted or presented in a grotesque way, giving the audience the opportunity to live and relive aspects related to childhood and every other moment of real life in a synaesthesia of senses and emotions that accompany us throughout our life path.

Dynamic and ambitious musical project whose warm, passionate and persistent sound of saxophone joins the bright purity of the piano and the ancestral rhythm of the percussion instruments.

A valuable sound distillate that summarizes in a few elements the enormous tonal potential of an entire symphony orchestra. An unprecedented and engaging interpretation that manages to make the masterpieces of two of the most important North American musicians of the twentieth century shine and vibrate: George Gershwin and Leonard Bernstein.

The American symphonic music of the twentieth century embodies all the elements that characterize that great country: the cultural varieties of the population merge into a new proud American identity; a new people and a new nation that encompasses in its music the fast-paced Caribbean rhythms, gospel/blues singing, nascent jazz and the academic tradition of Europe. The genius of Gershwin and Bernstein was to sublimate all these characteristics in an orderly and balanced way, allowing us to freely and easily grasp the “American dream” in compositions of excellent value even on a formal level.

This project features an exceptional ensemble result of the extraordinary collaboration between first class Italian musicians.

At the piano Roberto Plano, a world-famous concert performer who, after his victory at the Cleveland International Piano Competition, has established himself as one of the finest pianists on the international scene. He has given concerts and masterclasses all over the world. He has done recordings for the most important record companies including the recent collaboration with “Decca”. This latest album scored 5 stars by the magazines Music and Amadeus. He is also the first Italian full professor of piano at the prestigious Boston University.

The MAC Saxophone Quartet is considered one of the most important saxophone quartets in Italy: winner of international competitions and founder of two important saxophone festivals, it has produced important record works that are highly appreciated by both the public and critic. Its members are four first-rate soloists, Stefano Pecci, Luis Lanzarini, Alex Sebastianutto and Valentino Funaro, gathered in a dynamic and very high artistic profile, capable of interpreting both the masterpieces of the classical repertoire and avant-garde compositions. Even further, they show an innate musical taste and exquisitely Italian sound mixture that enhances both the tonal fusion of the ensemble and the peculiarities of the individual elements.

Percussion by Alessio Benedetti complete the ensemble. He is an extraordinary musician that, after perfecting himself with the most prestigious international masters, began to collaborate with renowned Italian artists. Eclectic percussionist, he is able to interpret at the highest-level programs ranging from classical repertoire to jazz to Latin-American genre.

Arrangements are written by Valter Sivilotti, one of the most acclaimed pianist, composer and conductor of his generation. His collaborations with the most important international names, both from the world of songwriting and from classical music, are countless and very successful. His musical compositions, for which he has received prestigious awards, are performed in theaters around the world.